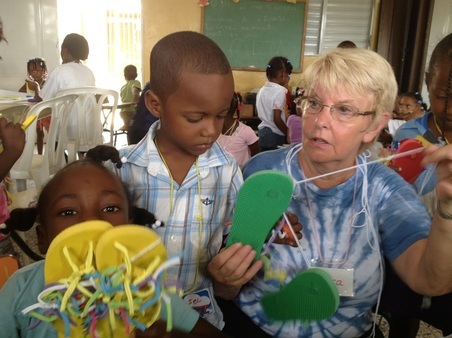 Loretta Tabor shows Dominican children how to tie bows to their flip-flops during a
recent Vacation Bible School program that was conducted by South Carolina Episcopalians.

The Reverend Richard C. Lindsey, Rector of All Saints Episcopal Church on Hilton Head Island, and five of his parishioners, plus a member of St. Mark’s Episcopal Church in Port Royal, have returned from conducting a week-long Vacation Bible School program in the Dominican Republic in June.

Nearly 300 Dominican children from two different churches participated in the VBS activities, which included liturgy, music, prayer, games, crafts, and liturgical drama. The sessions were held at La Redención Church located in a middle class section of Barahona, as well as at Jesús Peregrino Church located in one of the city’s poorest neighborhoods.

As the team’s spiritual leader, Father Lindsey celebrated the Holy Eucharist on Sunday with Padre Alfredo Romero, the Vicar at the two churches. According to one participant,  “Father Lindsey always had a ready ear and a pat on the back to share with all the adult volunteers.” Steve Tabor and Loretta Tabor of All Saints were the team’s co-leaders. Steve handled all logistical arrangements for the trip, plus a myriad of details as they were needed. Loretta developed the program schedule, curriculum, and crafts.

Carole Galli was the team’s music coordinator. She began and ended each day with rousing songs. Barbara Anderson of St. Mark’s kept all the craft supplies organized and accessible at just the moment they were needed. The parishioners of All Saints donated large quantities of magic markers, scissors, glue sticks, clothes pins, paper plates, as well as countless cardboard tubes that were used in the craft projects.

Pam Cooper served as the team’s translator. In addition, she played her flute during the music sessions and also managed to take numerous photos that documented the week. Susan Ferry coordinated outdoor games and activities. She made sure that everything was linked to the respective Bible verse of the day.

Unfortunately, a medical situation prevented team member Kathy Jones of All Saints from going to the Dominican Republic this year. However, she led the volunteers in team-building exercises that helped to keep everyone focused on what they could each bring to the team. She also cut and packaged 5,000 fabric loops that were used to decorate 300 pairs of flip-flops!

Previous All Saints mission team members that have gone to the Dominican Republic over the years have concluded that they received much more than they offered to the Dominicans. This team was no exception.  Father Lindsey pointed out,  “There are moments of great personal joy in seeing the wonder in a child’s eyes as if a light bulb has gone off, or the simple gesture of receiving a “gracias” from a six-year-old child, or the delight of a child keeping time and in rhythm with an “instrument” of their own making.”

Steve Tabor commented, “We are only able to give a snippet of our time to the children each year, but we truly experience God’s love through them.” Carole Galli observed, “The children were joyous and happy, open and welcoming, eager to please, eager to accept our love and attention, and eager to learn.” She added, “The adults we met at the churches were so appreciative of our support and extremely anxious to show how much they care about us and about the children.” Barbara Anderson stated, “I placed my faith in God and knew that all would work out well. And it did. The people of both churches were warm, loving, and welcoming.”

Through this experience, “I felt a richness in spirit unlike anything I have ever felt in America, ever felt in my own loving family," said Susan Ferry. She added, “Suffice it to say, I cried like a baby as I said my farewells to these new friends in Christ.” Loretta Tabor commented, “I feel humbled by the openness, kindness, and love that the people in these two churches shared with us.” She concluded, “It was certainly a week of celebrating and sharing God’s love.”

Pam Cooper pointed out, “One little week of the year, I became part of a team that was fully devoted to giving their all for the good of about 300 kids: deeply rewarding!” She added, “Although the week was probably the most intense and the most exhausting in my life, I should say because the week was the most intense and exhausting -- mind, body, and soul – I’ll probably jump in again.” She challenged her fellow parishioners with one question: “Care to jump in, too?”