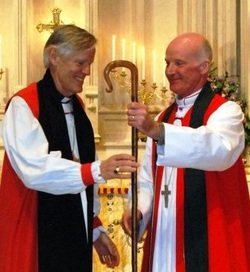 Bishop Gillies, right, presents Bishop vonRosenberg with a shepherd's stick from Balmoral, Scotland, as a gift during a visit to South Carolina in February 2013.
The Right Reverend Dr. Robert Gillies

Born 1951 and brought up in North Lincolnshire, UK, the Right Reverend Dr. Robert Gillies attended Barton on Humber Grammar School until age of 16, earning certificates in Biological Sciences and Medical Laboratory Sciences while working in the Pathology Laboratory at Grimsby General Hospital.
His training for ordination began in Durham and was completed in Edinburgh, where he gained two degrees in Divinity from the University of Edinburgh and was awarded the Shaw MacFie Lang Research Fellowship for subsequent research conducted while he was a curate.

He served as a curate first in Falkirk and then in Morningside, Edinburgh, where he was simultaneously chaplain of what was then Napier College (now University). It was during this time that three sons were born to him and his wife Liz: Patrick, Jonathan (who sadly died), and Andrew.

After Edinburgh, he served for almost seven years as the Chaplain to the University of Dundee, where he also held an honorary lectureship in philosophy, and with it gained a PhD for research in philosophical idealism from the University of St. Andrews. He was then Rector of St. Andrew’s Church for the next 16 years, and where his and Liz’ fourth son, Timothy was born. He became Bishop of Aberdeen and Orkney in 2007.

Dr. Gillies is the author of six books, mostly in the areas of Christian spirituality and formation. An internationally known speaker, he has given addresses in New York City at St. Thomas’ Episcopal Church during the Week of Prayer for Christian Unity and in for the Three Hours liturgy of Good Friday. He has preached and led retreats and conferences in the Diocese of North Karamoja, Uganda; the Diocese of Mbale, Tanzania, Dioceses of Umzimvubu and Mthatha in South Africa; Delhi Cathedral in India; and the University of the South, Sewanee.